What was the relationship with your father like? Most of my coaching clients are male leaders and I’ve found that, along with significant life events and people of influence, the Father Factor has the greatest impact on leadership. Other psychologists specializing in the area of father-son relationships agree it is one of the most complex in a man’s life and it’s a relationship that can affect all others including those at work and in the home. The experience with your father may have been positive or negative. He may have been involved, abusive, encouraging, critical, absent or unknown. No matter how the two of you related to one another some of the most significant and meaningful changes come after you acknowledge the connection with your father. It doesn’t matter who your father was, it matters who you remember he was. 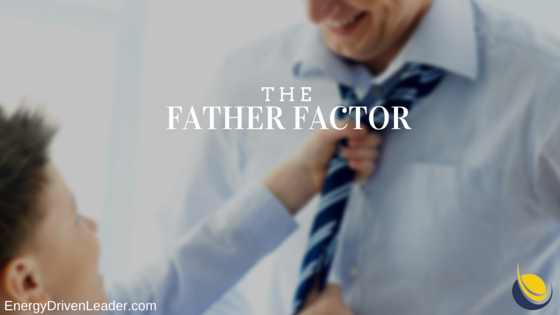 A father serves as a mentor to create a foundation or baseline for confidence, endurance and success. For males the father provides approval and self-worth, basically how the world sees you. Without that baseline you can spend your whole life trying to prove yourself. Robert Frost, the great American poet, said, “You don’t have to deserve your mother’s love, you have to deserve your father’s.”

Many men get stuck in life by expressing that they want to be just like their father or the opposite, I don’t want to be anything like my Dad. Either statement does not free you up to become the leader you want to be. Positive or negative, when you focus on being just like him or not being like him you develop a mental image of him and you become that mental image. I’ve talked to many men who have told me they never wanted to be like their father, but discovered as they matured they were becoming just like him. The answer, of course, is to create a mental image of what and who you want to be.

One of the key ingredients in leadership according to Warren Bennis is knowing yourself. In his book, On Becoming a Leader Bennis states; “Everything we did or saw, everyone we ever encountered, is in our heads. But all that psychic baggage can be turned into comprehensible and useful experiences by reflecting on it.”

What image do you have of your father? How has that impacted your leadership? Be aware that if you have children they are also developing a mental image of you. Comprehending The Father Factor is critical to being the leader you want to.

A crisis in Expertise–Identifying and illuminating blind-spots: Interview with Bill Carrier