Home Concepts Interpersonal Relationships The Invulnerability of Being Vulnerable

The source of this title is a bit vague to me.  That is, I’m not sure if I discovered it for myself or if some incredibly bright person told me.  Upon further contemplation I do remember — I did discover it for myself.

So what, exactly, is all this stuff about being vulnerable or invulnerable?  For you, I don’t know.  I can only address what it’s been for me and perhaps some of that may resonate.  Let’s see. 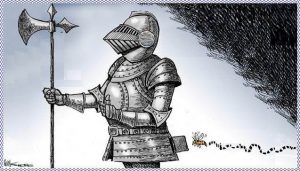 First let me define what vulnerable and invulnerable mean to me.  Early in my life being vulnerable meant to be open to “the slings and arrows of outrageous” barbs and cheap shots.  It meant being unprotected.  And who wants to go through life unprotected?  Ask any politician.  If I didn’t go to great lengths to cover my ass I would definitely be in constant jeopardy of being taken advantage of, of not getting the girl, of not being “accepted,” of not getting the part (I am an actor).  So vulnerable was out of the question.  You had to be clever, calculating, and possibly (but not necessarily) corrupt.

Being invulnerable definitely seemed the way to go.  I wanted to be accepted.  I wanted to look good.  I wanted to keep people in the dark about those things in my life that could be subject to ridicule and judgment (i.e., allowing my three boys to be adopted by my ex-wife when they were eight, nine and ten — what kind of horrible father would do such a thing?).

Looking back, those times of my life were excruciatingly painful and provided increasing evidence of the futility of that position — being invulnerable came back to slap me in the face over and over again.  But the slaps didn’t matter.  I had to protect my image, my “identity.”  I had to look good.  One of my more embarrassing revelations was discovering that instead of no one knowing what I was doing, in fact it was as obvious as poop on a white rug.  “O, what tangled webs we weave…”

I’ve often wondered why someone, anyone, didn’t point out what I was doing, but now realize that I probably wouldn’t have listened anyway.  Why should I have listened?  Everyone was playing the game and it was apparently working for them.   Even if I had known to ask how they were doing it, I wouldn’t have.  That would have implied vulnerability.

There was an incident early on that put a crack in my “egg of invulnerability” — at the time I could not have defined it as such but the evidence was evident.  I was a thespian “star” in high school.  In fact a 20th Century Fox talent scout, Doc Bishop (who had discovered Shirley Temple), discovered me in my senior play.  He invited me to the studio and introduce me around to the powers that be’d.  He wanted to put me under contract and groom me for stardom.  And all I had to do was wait till I was eighteen (I was seventeen at the time) and not get married.  I got married.  Doc found out and slammed the door to stardom in my face…hard.

Interpersonal Needs and The Human Spectrum