The real challenge, however, was awaiting us. It occurred during the carefully planned virtual session, when 15 senior level coaches were joining us for a virtual, Zoom-based three-hour session. Reports from the previous two days were to be made (using Power Point) and a tightly scheduled set of breakout rooms and plenary sessions were to take place. Both in-person and virtual participants were provided with time and a setting in which to comment on the presentations. Everything was to be video-taped, so that the comments could be preserved and later transferred to Vimeo for inclusion in the Library of Professional Coaching. To ensure that we had Internet stability, I suggested that we move the final session to my home and use my own computer which had served me well over several years (never any problems even when working in other locations throughout the world).

As one of the facilitators of NECS, I was pleased with the design of this final session and with our plans for ensuring that there would be no technological problems associated with the Zoom session. Nothing was going to go wrong . . . 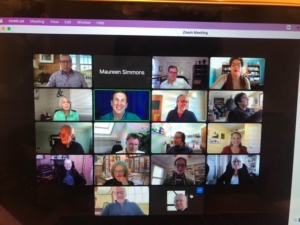 We began the virtual session as planned. One of our NECS in-person participants opened the session with skillful facilitation, which led to the first power point presentation. This presentation began for less than a minute and my computer suddenly froze and soon went black. It refused to open again and we were left with no communication with our virtual participants. They could communicate with one another but not with us at the in-person site (my home). Understandably, I was quite upset and frankly embarrassed that I had “messed everything up.” I frantically tried to get my &(%^&*$* computer to start up again and vowed to throw it in the trash bin once this meeting was over!

While I was focusing on my own psychological wounds, the rest of the in-person leaders and the virtual leaders sprang into action. After about a minute, one of the virtual participants (my colleague Bill Carrier) began facilitating the virtual session, inviting other virtual participants to reflect on what they have done (and other people they observe have done) when faced with a technological challenge such as they all just witnessed. Wonderful, in-the-moment reflection was engaged that built on this “teachable” experience. Members of the virtual group deployed their analytic skills and became “self-coaches.” In the past, I have written about exceptional people who can stubble over a rock and then pause to reflect on the rock and their stumbling. This coach-like reflective process was fully evident among those attending the virtual session.

At the same time, the in-person NECS participants were working together to problem-solve. One of them set up their own computer as a new base for the Zoom conference. Messages were sent out to the virtual participants to move to the new Zoom location. The new computer was placed closer to the router to ensure that the blackout of my computer wasn’t produced by a failed connection to the router. Ideas were rapidly shared. Many different people lent a hand in providing both coordination and direct services. Soon the new Zoom session began. I could sit back and appreciate what was being offered. The breakout rooms were set aside, and a powerful, generative dialogue began with “all hands on deck.” I witnessed agility and collaboration in response to a technological challenge. I witnessed leadership that was being exhibited by senior-level executive coaches who are usually doing the coaching about leadership, but in this instance were engaging in leadership themselves. It was amazing!!