The phrase “the shadow knows” (from an old radio program) seems appropriate in describing what happened to me at the time of this technological glitch. Actually, I am returning not to the radio program, but rather to the wisdom of Carl Jung—who wrote about the relationship between our persona (the self we present to other people) and our shadow (a powerful, often unconscious dynamics that operates in our psyche to correct for the persona) (Jung, 1979). In my case, the persona I was presenting the world was in full force and in command. I was being the competent facilitator and event planner. A touch of narcissism inevitably accompanies a successful persona. This was particularly evident during the summit—for during the Covid-invasion I had stayed pretty much away from other people—except in the digital world. While I am an introvert, I do like the occasional interaction with other people and appreciate their appreciation of my work. I was relishing my role. 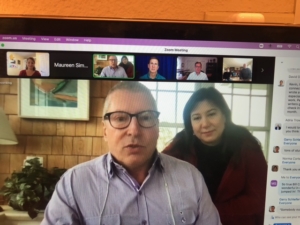 It is at these points when the persona is fully in operation and narcissism can puff up a sense of personal worth that Jung’s shadow function comes in to correct the situation and poke a hole in the puffed-up self. I found that I was not indispensable. Other people were doing all of the problem-solving. As Maureen Simmons noted, these NECS participants “stepped up without a blink of an eye”. Furthermore, they were supporting me (not blaming me). They saw and appreciated the “real” Bill Bergquist and said: “let us lend you a hand.”

As I reflect on my own personal learning that came out of this summit meeting, I discover that there were many personal insights. These insights were important for me and would not have occurred if the more general learning that took place for me (and I suspect, for many other participants) was not prevalent. I want to briefly comment on two of these more general outcomes.

Learning from Mistakes and Second-Order Learning

One of the major insights offered by Chris Argyris, Don Schon and their protégés (including Peter Senge) is that members of an organization should learn from their mistakes. In our challenging world it is impossible to avoid making mistakes. However, it is quite possible to learn from these mistakes. People are “stupid” not when they make a mistake, but when they make the same mistake many times. Organizational learning is based on this fundamental conclusion (Argyris and Schon, 1978). The reflective process that took place among the virtual NECS participants and later among the in-person and virtual participants working together exemplifies this process of organizational learning.

What I observed actually went beyond just learning from the mistakes that were made. Something called “second-order learning” was taking place (Bateson, 1972). This is about learning about learning. Comments during the concluding session and during subsequent conversations have focused on the process of in-the-moment learning that occurred. As Garry Schleifer noted in our recorded interview, this learning was based on collaboration rather than competition. No one (including me) was being blamed; rather we were all being buoyed up by the good will and trust that was exhibited by all members of this temporary NECS community.