When I met Camille B., she was no longer able to fly. She stood atop the damp coffee house, the tips of her red sneakers just over the edge so that she could bend her toes into the void below. She imagined unfolding her wings, knowing well that all she could feel now is the stinging, excruciating sensation of phantom limb pain. It came at her suddenly, overwhelming her small frame.

Her wings were the most beautiful objects she had ever seen. She used to marvel at them drying on the grassy earth, resting after a long flight. Youthful skin covered the main bone structure, which split at the humerus. The distance between the ulna and the radius was wide and it splintered into tiny, clear cells, divided by artificial metal veins and held together by a transparent film-like substance. There were no feathers, just a complex pattern of these monocrystalline silicon patches. They glistened from the rain. At sunsets, they absorbed the gold hue. When the wind blew underneath, they omitted a gentle vibration. For Camille B., it sounded like the ancestral flutes of a forgotten tribe. She heard music when she flew. 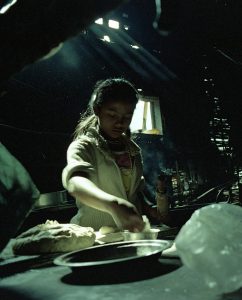 Camille B. was seventeen years old when she first took flight. She was barefoot and wore black, cotton pants and a bathing suit top that allowed for her wings to open and close. She had a leather string around her neck, holding a small talisman she received from her mother. She stood on a grassy mountain. Down in the valley, she could hear grazing animals and the sound of a motorcycle. She begun to run, and took on a relaxed motion forward with her body in a tall, elongated position. As she approached the take off point, she lifted her knees higher and maintained her speed. With her left leg leading, she jumped up, driving with her arms. She waited until she was airborne before she unfolded her wings. The first ten seconds were the hardest. She had to control the rotation of her body and make sure the wings would not collapse, sending her plummeting into the valley. Her tights and stomach were bruised and scarred from the many previous attempts in which she simply could not sustain the flight and fell.

She leapt and opened her wings. She hardened her leg muscles and held her arms tight against her torso to stabilize her body. Past the ten seconds she was still in the air. Slowly, she felt in control. She lowered her left wing an inch and her body dipped in that direction. She saw the grazing sheep and a teenager cutting grass in the valley. They were tiny.

Dominic Turnbull & Charles E. Smith On the morning of 25 October 1415 (Feast of Saints…