As a company dedicated to coaching, mentoring, and developing leaders of all types, we are always stressing to our clients how important it is to have role models and even heroes to help us model our behavior. Studying the lives of leaders is a useful exercise in leadership development. The recent passing of Arizona Senator John McCain has led me to think about how this man’s extraordinary life can be an excellent role model for all leaders. 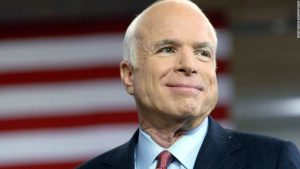 Sen. McCain lived the most extraordinary life. The scion of a successful military family imbued McCain with strongly held views, principles and values. Although no doubt intelligent, his performance at the Naval Academy suggested that he was no rocket scientist, but his actions and behavior throughout his life demonstrated an amazingly high degree of emotional intelligence. During his 82 years he mastered self-awareness and a sharp and keen awareness of others.

Let’s look at some of the ways that John McCain’s life and his actions serve as a perfect example of  a leader worthy of emulation and appreciation.

Be true to your values – Regardless of one’s political sympathies, you cannot deny that John McCain was clear in his values. For all his talk about bipartisanship, John McCain was a conservative with deeply held views and values. This was strengthened by his enduring love of the United States, its ideals and beliefs, and that as a country we stood out not for our power or natural resources but the conviction of our ideas.  Throughout his life, McCain was true to these ideas values.  In all matters, he put his country and service to his country as his primary reason for existence. Both as a naval aviator as well as a politician his actions demonstrate clearly that being true to your values and steadfast contributed to his success as a leader.

Understand your opponents – When we speak of emotional intelligence, we make a big deal of the necessity for understanding and having empathy. This served John McCain well, whether as a prisoner of war in Hanoi or his long career in the Senate where success in been drafting unique legislation, he needed not only to understand his opponent’s positions, but be able to understand their needs and their aspirations to gain consensus.

Apologize for your mistakes – John McCain over the course of his career understood the necessity not only for making mistakes but for admitting one’s mistakes as well as also taking them to heart. His mistakes shaped him as much as his successes.  When wrong he was not afraid to publicly admit his errors. One can only remember his apology for his short-term acceptance of flying the Confederate flag over the South Carolina State House during the 2000 primaries.

Speak your mind – Agree or disagree with John McCain, one can be sure that when you were with John McCain you knew exactly where he stood.  Whether over campaign reform or when he took his colleagues to task for their lack of teamwork in the Senate he never shirked from speaking his mind.

In Search of Islands of Sanity

The long-term goal is an economic system based on Human Mutuality. …