Published in, and reproduced with permission from, choice, the magazine  of professional coaching www.choice-online.com by Suzi Pomerantz  originally published in June 2010. 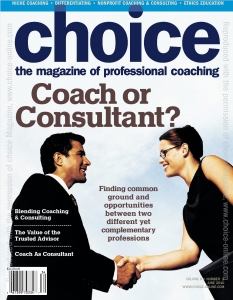 Is your coaching really consulting? Maybe if it
was, you’d be making a six-figure income!

Does your contract include language referencing the
descriptors of a coach as “guide” or “trusted advisor,” or
is the term “consultant” anywhere in your document? If
so, you could be open to an ethics violation from the
International Coach Federation (ICF).

In an ethics ruling against a seasoned MCC within
the last five years, the Independent Review Board of
the ICF’s Ethics Committee ruled a coaching agreement
to be “unclear with reference to the nature of
coaching” when the coach in question had the following
language in her contract: “Coach agrees to serve
as guide, advisor, and consultant in the areas identified
by the client.” The ICF ruled that such language
in the coaching agreement, regardless of the fact that
it was referencing services performed in an organizational
context, “is not in alignment with the ICF definition
of coaching or the ICF Core Coaching
Competencies.”

Bravo to the ICF for putting a stake in the ground around
the differentiation between coaching and consulting.

Beware to the coaches who want to make a living!

Is Coaching Part of Consulting?

When talking to executives and leaders, I often
describe my work as “directive coaching” based on my
philosophy that the corporations in which I coach
leaders and teams don’t actually pay big bucks for me
to come in only asking questions. The ICF and several
coach training schools will have you think that pure
coaching is when the coach only asks questions, and
that anything other than asking questions constitutes
consulting. This could be the biggest disservice perpetrated
against new and under-utilized coaches by
the industry into which they are attempting to grow
their coaching businesses. If a coach is interested in
breaking into or expanding his or her business into
executive or leadership coaching, it will help tremendously
in the sales process to hold coaching in the
broader context of consulting.

In my 17 years in the business, I’ve seen a lot of
efforts to distinguish between coaching and consulting.
There was an article early on in a 2004 issue of
the International Journal of Coaching in Organizations
(Volume 2, Number 3, p.8: “The Ethics of Coaching”)
where authors Bergquist and Grenier did a wonderful
job of comparing the three Cs of coaching, consulting
and counseling. I understand the dangers of
co-mingling coaching and counseling, and there have
been some legal cases in the U.S. accusing coaches of
practicing therapy without a license. I get that; psychology
is a highly regulated profession requiring
serious training and coaches who tread on counseling
space risk causing real harm to people with needs
best addressed by therapy or medication. But why the
big push to separate coaching from consulting?

Not intending to be controversial, I define coaching as part of the larger
umbrella of consulting, particularly when it is performed in an organizational
context. As a coach whose subject matter domain is leadership and business development, I work
primarily in organizations with leaders and teams. In that context, the buyers are familiar with consultants
and the value of the results they produce for the company.

When selling coaching services into organizations, the coach will be viewed by the buyer as a consultant.
If it doesn’t matter to our buyers that there be a distinction between coaches and consultants, why do we
care? Decision-makers in companies are comfortable with buying consulting. There’s a precedent for
buying consulting, and often when they buy coaching, the expense appears in their internal systems as
consulting. It’s how they think of us anyway, so why do we need to assert our “non-consultant-ness”?

On the other side of the equation, I am not advocating for coaches to become true consultants and
advice-givers. That opens up the whole conversation about liability insurance. Consultants (especially
those involved in finance, construction, legal matters, etc.) need liability insurance because their advice
could cause their clients to experience financial losses, damage, etc. Consultants carry expensive Errors
and Omissions insurance for that very reason. As coaches, we do not give advice; however, if we begin to
think of ourselves under the larger umbrella of consulting, we may need to consider the same sort of protection
for our businesses, especially if we engage in both coaching and consulting solutions for our clients.

I’d argue that it is a benefit to those of us who coach in businesses to be lumped together with the
broader consulting world, for the sake of credibility. Consultants get results in an organizational context.
They are smart problem solvers with subject matter expertise. Think McKinsey. Think Accenture.
Think Deloitte. Consulting, in the big leagues anyway, is about excellence. The branding is powerful.
The dollars are enormous. We, as coaches, could use that to our advantage in the sales process.

Marketing Yourself As Consultant

Many coaches are not comfortable being a consultant. Consultants are
accountable to bring answers. Coaches bring questions. Consultants
have to know and be subject matter experts. Coaches uncover more when
they come from not knowing; from genuine curiosity and wondering.

Consultants bring, for comparison’s sake, benchmarks of the
solutions of other companies and leaders with similar problems.

Coaches hold up a metaphorical mirror so that the companies and leaders
can learn from their own successes and experiences. Consultants hunt
for problems to solve. Coaches seek strengths to build on. We can keep
going with the differences.

But think about your business development efforts for a minute.
Are you not a subject matter expert on the subject of coaching? Are you
not seeking the problem or challenge your prospective buyer is facing to
determine if coaching is an appropriate intervention? Are you not bringing
“benchmarks” of results your coaching has created for others
facing similar situations as your prospective buyer? Doesn’t that
make you a consultant in the process of getting someone to buy your
coaching services?

If you’re not comfortable being a consultant in your coaching business,
try it in your sales process. It will make all the difference in your
revenue results.