Published in, and reproduced with permission from, choice, the magazine  of professional coaching www.choice-online.com by Suzi Pomerantz and Steve Gladis originally published in June 2009. 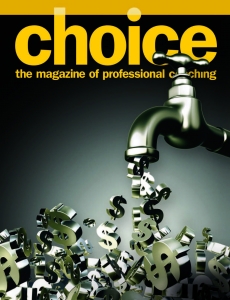 Coaching is not about money, yet “money is important,
if only for financial reasons,” to quote Woody Allen.

Sponsors contact executive coaches when an executive’s
behavior begins to interfere with corporate
progress, morale or culture. The CEO might want an
executive to be coached to the next level of leadership.
When asked, “Can you help?” you either choose a path
that will seal the deal with perfect pitch (i.e. a harmonious
win for all parties) or fall out of tune.

In this article, we offer an alternative to describing your
coaching and how it works. A sponsor may not be ready
for or interested in the process, benefits or features of
your coaching methodology. Often, the sponsor may not
yet be aware of, or convinced of, the value proposition –
the what’s-at-stake-for-the-organization and how you, as a coach, can help.

You have discussed the problem and the coaching solution,
and the cost question arises. Money can break the
deal, unless you find what we’re calling “perfect pitch” – as
in harmonious music. Perfect pitch is an equal exchange
of value to all parties involved. Traditionally, the value
proposition is the relationship between an offering by a
vendor to a customer and the perceived worth of the service
or product. Simply put, if you come into my store and
buy a bag of groceries, you expect what I sell you to be
worth what you pay.

The coaching value proposition is different. We offer
expertise in the coaching process – the ability to become
a trusted partner to guide an executive to self-discovery.
We provide a safe place to explore change, often the only
place where an executive can come to grips with a challenge
that has likely cost time, money, and aggravation.

This cost to the sponsor, the executive client, and the
organization is one of the centerpieces of perfect pitch.
Tune in to the sponsor’s wavelength to help him understand
the true value of the coaching results.

Coaches often detour from perfect pitch, as in this
conversation between a coach (C) and a sponsor (S)
after discussing a prospective client:

S: So, now that you know our situation, how much will
coaching cost?”

C: I do a 360-assessment, weekly coaching sessions,
an evaluation to determine progress after three
months …

This conversation continues with the sponsor trying
to mentally fill his value bag with your itemized coaching
offerings. This approach is coach-focused, not organization-focused or client-focused. Invariably, sponsors try
to relate the service to hours invested – like lawyers –which is a broken model for coaching. Further, such
sponsors cannot fill the bag to their satisfaction because
they don’t have enough experience with coaching to feel
they’re getting the commensurate level of value back. In
a sense, the sponsor and coach are on two different levels
of pitch – and out of tune.

Create perfect pitch by getting the sponsor to articulate
and define what the current problems are costing
the organization. Start with the organization, not the
coach in this conversation:

S: So, how much will the coaching cost?

C: Let’s look at what you’re trying to accomplish.
What are the organization’s major objectives for the
next year or two?

S: We have to prepare for the mass exodus of retiring
boomer executives, and our goal is successful and seamless
succession planning and leadership development
for our emerging leaders, plus rapid onboarding to meet
production goals.

C: What’s the potential business outcome? When
you’ve got leadership bench strength and a strategic
succession plan in place to seamlessly transition your
retiring leaders out and your emerging leaders into
action, what cost savings or bottom line increase will
that create for your company?

S: I’d guess a savings of about $1.2 million factoring in
the costs of attrition, training, onboarding, and uninterrupted
production schedules.

C. OK, and on the flip side, can you describe how the
problem shows up?

C: How so? Can you describe what he actually does?

S: In briefings, he says “What a stupid proposition.”
Or, “what planet are you living on?”

C: What’s that costing your company?

S: Roughly four times their annual salaries, so in this
case about $2 million in the past year. The cost of customer
relations, retention, retraining, culture adjustment,
and reputation has deep impact well beyond
these numbers.

C: Two million. I see. And this pattern has been going
on for how long?

S: Since I’ve been here, going on five years.

C: So at this point, in just this area, you’re talking
about a $10 million dollar loss to the company?

C: Now, add your previous estimate of $1.2 million
dollars cost-savings if you succeed in the healthy transfer
of leadership. So, you’re looking at a potential business
impact of $11.2 million dollars, is that correct?

C: Would it be worth spending a small percentage of
that on coaching to create a solution that saves the
company a good portion of that $11.2 million dollars?
In this case, you’ve coached the sponsor to actually
say the words and feel the weight and magnitude of
$11.2 million dollars. You’ve helped the sponsor quantify
the size of the problem. Once the client has defined
the scope and size of the challenge, the conversation is:

S: So, how much will the coaching cost?

C: For a challenge of this size, say $11 million, it’s a
fixed project fee of $50 thousand dollars for a year-long
engagement, which works out to be a very small percentage
of the scope of the problem you just laid out (less than half a percent). If it is worth that percentage to you to save an extraordinary amount of time, talent and money in your company, then we can look at getting
started.

This is a very different place to enter
the contracting phase of coaching
rather than “Wow…that’s steep!”
Frame the customer value proposition
in terms of the customer’s needs
and the results that will speak to the
client and the organization. Often
clients have never quantified the
scope of the impact of a particular
executive behavior. Too often the
coach bargains down the cost or the
sponsor over-expects or remains
skeptical.

Helping the sponsor to frame the
scope of the issue — size, importance
and cost to the organization — allows
both sponsor and coach to hear the
value proposition as it occurs in the
sponsor’s reality. It is a collaborative
co-creation that utilizes your best
coaching skills.

Help sponsors hear, in their own
words, the scope and cost of a problem
as well as the upside value to the
solution. Yes, we are there to help,
and the value proposition is about
what’s in it for the organization,
sponsor and client. There is a coach’s
side to the value equation as well, and
that’s where money comes in.

When we cater to the value of co-created,
client-focused results while
pricing our services professionally
(and commensurate with the magnitude
of the solution), we create an
equal exchange of value. Then we can
be in perfect pitch.

Published in, and reproduced with permission from, choice, the magazine  of professional coaching www.choice-online.com by Suzi Pomerantz and Steve Gladis originally published in June 2009.

The Lead Hunt Workbook- Exercises for Building a Clientele