I have a love/hate relationship of sorts with Emotional Intelligence. In 1995, my boss at the time suggested I read the recently released book by Daniel Goleman as part of my development.

She didn’t mean it in a casual “this is a book you might enjoy” kind of way, but more of a “if you don’t figure this out, you’ll never be successful” kind of way. Hmmm. 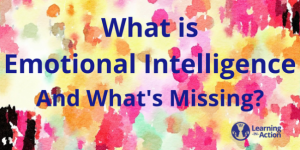 One of the reasons I purchased Learning in Action a few years ago was because there seemed to be no end to the depth of the space we call Emotional Intelligence. It’s a rich, complex topic with so many angles into it.

This post is a bit on the dry side. It’s intended to help you and your clients better understand the origin of Emotional Intelligence, how it has been defined, the limitations of some of those definitions and how the definition we use really matters if what we are wanting is to be more successful in life and in business.

A Brief History of Emotional Intelligence

Emotional intelligence (EI) is defined differently by different people. In fact, authors Gerald Matthews, Moshe Zeidner and Richard D. Roberts wrote in their 2004 book on the topic, “EI may be the most protean of all known psychological constructs.” David Caruso, Research Affiliate at the Yale Center for Emotional Intelligence, called EI a conceptual inkblot.