“Does a leadership archetype exist? And if it does, how do I find more people who are genetically wired that way?” That was the tough question posed to me recently by Jeff, a CEO who was desperately seeking talent for his fast-growing startup. We had been discussing the passion archetypes of his top team and reviewing the particular strengths the archetypes each person held could bring to the business. Two universities have studied the passion archetypes, which were first identified and measured through the Passion Profiler, a tool developed by Purpose Linked Consulting. The conclusion is that we are all wired with ten distinct passion archetypes, but we express them uniquely, and each archetype demonstrates a particular pattern of behavior in the workplace (and in one’s personal life as well). Here is an overview of their contribution to leadership thinking: 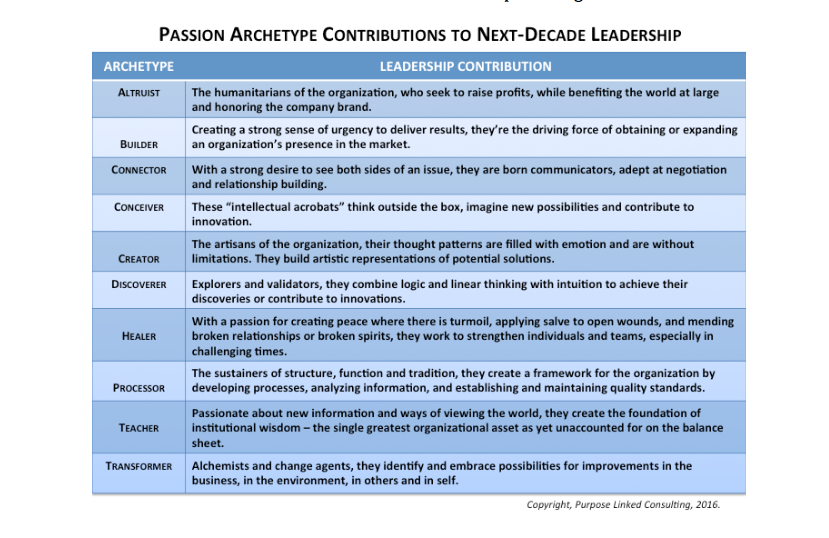 Look, this is probably my last startup,” Jeff continued. “I want the company to thrive well into the future and I want to develop a stable of potential successors to take this business to the next level. Technology is changing at light speed and we’ve got to do more than just keep up; we’ve got to anticipate and innovate. I need someone with the energy and mental chops to make that happen,” he shared.

I asked Jeff about his current staff and whom among them he thought performed particularly well. He began by telling me about the woman he’d hired to lead the tech team who had a strong Processor archetype and could be counted on for efficiency and accuracy. Another star in Jeff’s opinion was the president of manufacturing. He was an “Olympic-level Builder”, who delivered product on time and within quality standards, despite battling numerous supplier challenges over the last six months. In Jeff’s estimation, these two were the leaders he could count on today, but he wasn’t certain they could effectively lead the company in the coming decade, when competition in his industry sector would be even more intense.