Most clients feel emotions, if not in their body, then at least in their head. Emotions can often signal when something is awry and that a change is needed. We may think of this as a sort of base layer in the framework, what we call level 0. At the next level up reside the logic and facts from which we operate. For example, suppose a team leader holds the belief that all workers will inherently expend as little energy as possible. He observes his team working at what he perceives to be less than 100-percent effort despite his continued exhortations and incentives. Clearly a new model, or schema, must be developed to embrace the idea that some other force or factor may be at play. In essence, he must move up to the next level, or loop, of learning. Theorists dubbed this concept double loop learning.

Business theorist Chris Argyris collaborated with philosopher Donald Schön to take the concept of double loop learning into executive leadership development. As the executives were struggling to understand why a specific situation wasn’t working out as planned, Argyris and Schön encouraged them to move up to the next level and explore new values, beliefs or schemas that may fit. Subsequent theorists probed an additional level and landed upon the idea of changing self-concept and learning style. These highest-level changes manifest themselves in profound shifts in the individual’s outlook and subsequent behavior. These conceptual levels create the framework we all use as a backdrop for our daily behaviors.

We call this model the Generalized Model of Adult Change (GMAC) since it appears to have broad applicability to adult humans. 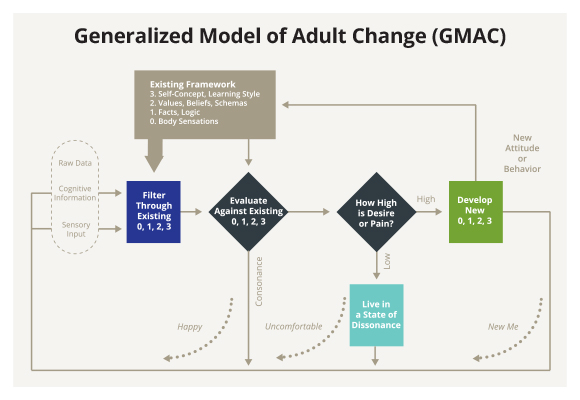 In essence, the work of generative men and women involves moving inward as well as outward…