The last step in the process of energy conversion occurs at the tether ends where it is expressed by individuals within the company in its internal operations and relationships with the external world. The final results produced by this energy depend on the skills and attitudes of every individual manager and employee expressed every minute in countless small acts in every functional area. These skills and attitudes are like the hair-thin filaments of an incandescent bulb or the microscopic circuits on a computer chip which determine whether the energy flows as intended or results in a short-circuit that prevents perfect execution of work. No matter how sophisticated the aircraft may be, during a tough storm the skill and diligence of the pilot can make the difference between life and death. No matter how large the company, perfection in small details really counts.

Ivo Boscarol founded Pipistrel as a craftsman who simply loves inventing and producing elegantly designed, electronically sophisticated, high performance small airplanes. His commitment to perfection in every small detail backed by the essential knowledge and skills of his small, highly committed workforce drove the growth of his private business to become a high potential, high-stakes player in the international market for small aircraft. Like so many other small entrepreneurial businesses that have made the successful transition to high performance growth companies, the challenge before Pipistrel is to raise that value commitment, knowledge and skill ever higher even as the company rapidly expands. 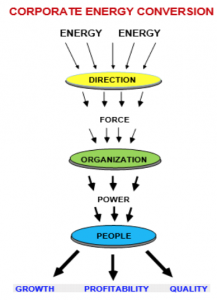 The river and the power plant are a metaphor which is inadequate to capture the living vitality of high energy organizations. High performance companies are self-organizing, living organisms that grow, adapt and replicate themselves, rather than mechanical systems that are assembled and in need of continuous repair. The process by which energy is generated, directed, channeled, transformed and expressed in productive work knows no limits. California redwood trees are the largest living things on earth, some of them more than two thousand years old. The difference is that the speed of growth for redwoods is slow and limited, whereas the speed for the growth of a business is limited only by the overall efficiency of the energy-conversion process. Über was founded in 2009. Today it offers taxi services in over 300 cities in 56 countries around the world. Forbes lists Groupon as the fastest growing company on record. In its first six years, it expanded its operations to cover 22 countries and achieved revenues of $3.2 billion.

A Crisis of Expertise II: Blind Spots and the Role of Coaching