Team Coaching is fundamentally an individual and collective process of learning and change, and as such, team coaches should have a clearly articulated “theory of change” that underlies their Team Coaching approach.

Throughout the years with my Team Coaching clients, I have witnessed team members struggling at the beginning with systems thinking skills when asked to draw a picture in their mind of their working systems. I know the feeling, as most of us baby boomers/Gen Xers in the Western world have been (conventionally) educated and conditioned into thinking linearly, step-by-step in a continuous piecemeal approach and bringing with it a scientific one-truth avenue. The temptation is to look for facts rather than allowing patterns to emerge….

Being a Frenchman, Descartes initiated a bit of this, and I should know a thing or two about the Cartesian dualism mentality because the French educational system is still overwhelmingly based on this mental construct. Nevertheless, this “mental map” has its benefits such as PMO, striving to standardize and introduce economies of repetition in the execution of projects with its deadlines, implementing and executing task-orientated work.

However, in order to navigate the complexity of this VUCA] world and its “wicked problems,” it is difficult to adapt to the rigidity, certainty and predetermined linear outcomes, as uncertainty is the new norm. My twelve years in the trenches designing and delivering team coaching programs have led me to conclude that the AQAL Integral Framework developed by Ken Wilber and the Integral Institute is, by far, the most precise map currently available for my “articulated” theory of change within a team coaching context.

AQAL itself stands for “All Quadrants, all Levels,” which is short for “All Quadrants, all Levels, all Lines, all States and all Types,” which are the five dimensions or elements that Wilber uses to define reality. The AQAL map ensures that you are utilizing the full range of resources for any situation, with the greater likelihood of success because ALL experiences have both interior and exterior components in singular and collective forms. 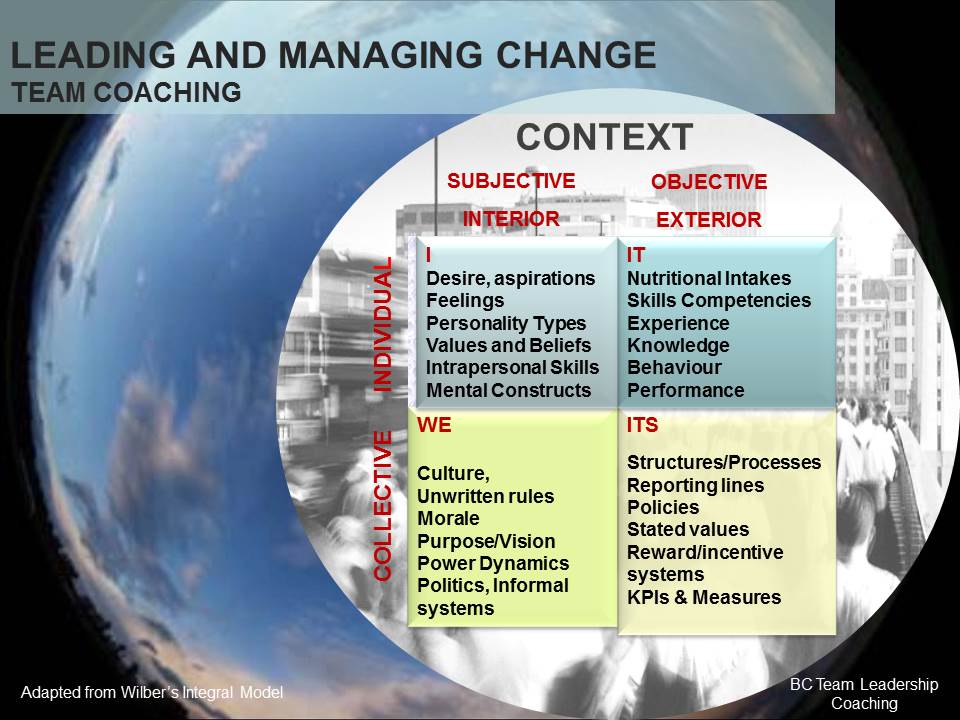 It’s a 5D multidimensional integral way of looking at reality, and as coaching practitioners, we can use this at different levels. For the simplicity of this article, we will map a change journey from a quadrant perspective using team coaching and the collective as a unit in the center of the diagram.