The Glut of Coaches 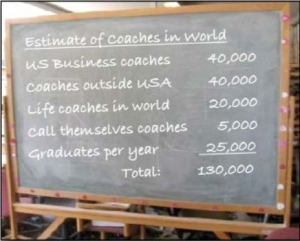 Coaching is one of the fastest growing industries. But no one really knows how many people are actively involved in coaching as a full- or part-time career. This number is important because it may be the underlying reason why the trends identified by Jan Newcomb and the five additional trends to be detailed later in this article have emerged, and paradoxically may also be the main reason why the public is becoming less accepting of coaching as a credible industry.

In my article, Coaching Statistics, Facts, Guesses, Conventional Wisdom and the State of the Industry (Carr, 2008), I quoted sources within the coaching industry that estimated there were approximately 40,000 business coaches working within the USA. Another 40,000 coaches were considered operating in other countries around the world.

The International Coach Federation in response to an August 14, 2015 question asked via Twitter, stated that the number of persons coaching worldwide was significantly less than the 2008 estimate. The ICF figure, based on their 2012 ICF Global Coaching Study, was stated to be 47,500.