Home Tools Executive Presence Feeling Like a Fraud: How to Overcome Imposter Syndrome

I was 22 when I first became a manager. I remember some of my early thoughts – “Wow, I’m so lucky.” and “I can’t believe they think I’m ready.”  These insecurities seemed normal, the product of being so young. But then at 28, and then again at 33, I was still questioning myself, my abilities, and my competency in leadership roles. 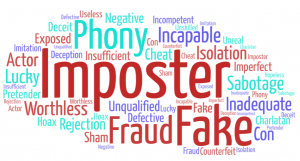 I recall several career transitions where I didn’t believe I was qualified for a new position or thought that the decision maker placing me in charge had made a mistake. There were many times where I attributed my successes to luck and chance rather than my own effort. A little voice inside me would say “you will soon be exposed and they will figure out you aren’t as great as they think you are.”

I was wrong. The little voice inside was sabotaging me, lying to me. I was qualified, experienced, and capable. With each higher step in the career ladder, I proved that voice wrong.

Only in recent years have I come to realize that throughout the course of my career, I was battling the “Imposter Syndrome.”

I first learned of Imposter Syndrome through reading Sheryl Sandberg’s book Lean In. While there are psychologists who qualify it as a diagnosis or illness, this term has come out of the therapist’s office and into the workplace. The alternate definition of Imposter Syndrome is described as feelings and behaviors that may include the following:

Essentially an “imposter” believes that they are not the qualified, accomplished, competent individual that others say they are.

It can be brought on through various factors: a negative work environment, burnout, or unsupportive colleagues. But most often, I have found that it comes from a place of insecurity. The lack of self-confidence feeds a fundamental belief in a person’s perceived inadequacy. It translates into a rejection of accolades, or advancements, and can result in the belief that the person’s success is a result of other factors instead of what they themselves have contributed to the situation.