The Pyramid Resource Group conducted the proprietary Team Advantage™ program with Blue Cross Blue Shield of North Carolina (BCBSNC). A professional coach from the Pyramid team led the project and was assisted by two internal coaches from Blue Cross. The company saw tangible business impacts from the process as described below.

Team Advantage had a positive impact on our employees. Morale began to increase  with the teams. Once they saw how we were collaborating, they began to engage more cross-functionally with each other. – BCBS Participant

The Membership Operations Management team was looking to develop more cohesion and collaboration among their leaders in order to drive improved business results. They were accustomed to operating in silos with little sharing of ideas and best practices. Senior management hoped to establish more  “enterprise thinking” within the department. 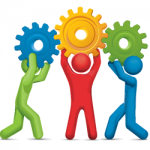 The management team tried other interventions in the past with little success and there had been many false starts due to the amount of change within the organization. Although the leaders received formal training, there wasn’t an opportunity for them to put their learning into “action” in a way that provided positive coaching to help push beyond what they considered to be barriers to change.

The team agreed to participate in a pilot team coaching program using a proprietary process known as Team AdvantageTM. Internal BCBS coaches had participated in a Team Advantage certification workshop and teamed with an experienced professional coach from The Pyramid Resource Group to implement the program.