This had all of the markings of an impending disaster. The New Executive Coaching Summit (NECS) was scheduled to begin at what was supposed to be the “ending” days of the Covid-19 dominance. Yet, this ending was certainly not the state of affairs during the last week of April in 2022. Many senior level coaches who were planning to attend the in-person NECS either cancelled because of the virus or transferred from the in-person event to our concluding virtual session of this summit. Plans were changing and major adjustments had to be made up to two days prior to the start of NECS. Then there were the delayed and cancelled airplane flights to Portland Maine (near where the summit was held). Covid had its impact on the availability of flight crew.

Careful planning had taken place regarding how to manage the gathering of NECS participants who were staying at several hotels in two Maine communities (Brunswick and Harpswell). The sure thing was to convene on the first evening at one of the hotels in Brunswick so that we might dine together at the hotel’s restaurant. What did we discover: the restaurant was closed! Once again, a Covid-related staffing issue. We met in the hotel lobby and checked on other restaurants in the neighborhood. They were also closed or would soon close (at an early hour). 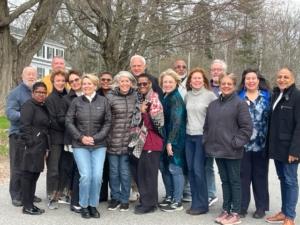 Only one choice: a noisy pub (bar/restaurant) that mostly served local college students. Not a very good option. I was waiting for some late arriving NECS participants, and we then walked to the pub. What did we find? Assembled around two tables at the back of the pub were all of our participants. The pub was practically empty and very quiet. Our tables were bathed in low lights and an immediate sense of collegiality as folks shared stories about their journey to Maine. The waitstaff were wonderful and adjusted immediately to the sudden onset of 20 folks who were long past college age! Our NECS participants had immediately demonstrated their ability to adjust rapidly and with grace to a change in plans. Agility and collegiality were in full display.

These leadership skills were required throughout the three days of the summit. Other restaurants were unexpectedly closed and the weather was much too wintery and often storming for some of the outside events we hoped to engage. Lobster meals were featured in the promotion of this summit, yet the nearby lobster pound for the first time in my memory was out of lobster and the search of many NECS participants for a decent lobster roll was derailed by closed restaurants and scarcity of caught lobsters (once again Covid-related staffing issues). Everyone adjusted their expectations and further built their sense of comradery, adding stories about elusive lobsters and closed restaurants to their shared narrative.

Lifetime Achievement Award Presented to Dr. Jeannine Sandstrom for  Stewardship of a Nurtu…